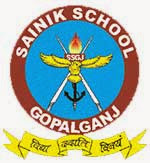 Sainik School Gopalganj is situated at its temporary location at Hathwa Raj Guest House, Hathwa, Gopalganj Distt in Bihar. The nearest Railway Station is Siwan Jn which is 20 Km away from the School. Nearest Airport is at Patna at a distance of 195 km, Gorakhpur (UP) is 130 km from school. The School is spread over an area of eleven acres.

The scheme to establish Sainik Schools was introduced in 1961 with the primary aim of preparing boys academically, physically and mentally for entry into the National Defence Academy. The schools are a brain child of Sh. V.K. Krishna Menon, the then Defence Minister. The other objectives of Sainik Schools are:-

a) To remove regional imbalance in the Officer cadre of the defence services.
b) To develop qualities of body, mind and character which will enable the young boys to become good and useful citizens.
c) To bring Public School education within the reach of the common man.