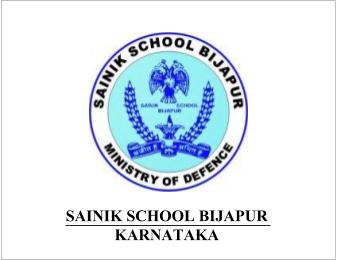 SAINIK SCHOOL BIJAPUR (SSBJ) began functioning in temporary shelters on September 16, 1963. Thirteenth in the series of Sainik schools set up across the country in the sixties, SSBJ was cosseted in a small corner of Vijaya College in Bijapur.

The management of Vijaya College lent the school a section of its building where the morning assembly, the library and the classrooms were housed. The school moved to its present permanent 406-acre campus on Athani Road Bijapur in the month of November 1966. Dr. Zakir Hussain, Vice President of India, declared the school campus formally open on December 17,1966, offering the secondary school leaving certificate at completion of course, SSBJ now offers the CBSE syllabus of study.

The name Bijapur is believed to be derived from the Sanskrit term for victory. The city has a rich history and is known for some of the most interesting monuments of the mid centuries of the second millennium. The Gol Gumbaz is renowned internationally as the largest unsupported single dome structure in the world. Ibrahim Rouza is another impressive structure. Both these master pieces of architecture were built by the AdilShahi kings.

Bijapur is the head quarters of the district administration and is close to Karnataka’s border with Maharashtra. It is an important point on the railway line running from Hubli in the heart of Karnataka state to the city of Solapur in Maharashtra, 100 kilometres to the north. The National Highway No. 13 that connects Solapur with Bangalore also passes through Bijapur.