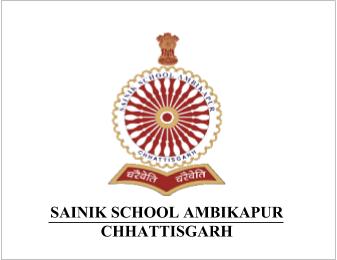 Sainik School Ambikapur started functioning with effect from 1st September 2008. The Sainik Schools are a system of schools in India conceived in 1961 by V. K. Krishna Menon, the then Defence Minister of India and established by the MoD under the aegis of the School Society to rectify the regional and class imbalance amongst the Officer cadre of the Indian Armed Forces, by preparing students for entry into the National Defence Academy (NDA), Khadakwasla, Pune. Today there are 25 such schools covering almost all the states of the country.

The first decade after independence was a traumatic one. The wounds of partition, communal holocaust, resettlement of millions of refugees, integration of the five hundred and odd native states, the clamour of linguistic reorganization – these were but a few of the daunting problems. The compulsive hostility of Pakistan, souring of the once friendly ties with China, turbulence in the North-East and a vast coastline highlighted the necessity of a nationally representative, sizeable and well-equipped Army, Navy and Air-Force.

Prior to the Government of India Act of 1935 and the acute demands of World War II, the officer cadre of our armed forces was not open to our countrymen. Rare exceptions were granted to the scions of royalty and blue blood. Analysis of then existing officer cadre revealed a disturbing trend. It remained a monopoly of the so-called martial races and regions and alumni of the highly expensive and elitist public schools beyond the reach of all but a few. In short, our defence forces lacked a truly all-India image, character and ethos. The Indian Military Academy was in existence, therefore the setting up of the National Defence Academy (NDA) at Khadakvasla was but a logical step. The high levels of physical, mental and intellectual attainments needed for induction into the officer cadre could not be nurtured in the common schools mainly because of the lack of infrastructural facilities. A laissez-faire policy to leave it to the already existing, posh public schools would have been grossly unfair to the bright young children all over the country, for whom education in a public school was nothing but a dream. All these reasons prompted the then Defence Minister Shri V K Krishna Menon to envisage a chain of Sainik Schools with at least one in each State to serve as feeders to the NDA. Further, they would act as role models and influence other schools by their example and performance towards a paradigm shift in objectives of school education, as in the pre-independence years and to some extent even today, our education system is syllabus-examination oriented and not aimed at all-round development and enhancement of competitive skills.