Question 1:
(a) Tara Nathani wants to upload and download files from/to a remote intenet server, write the name of the relevant communication protocol, which will let her do the same.

(b) Two doctors in the same room have connected their Palm Tops using Bluetooth for working on a Group presentation. Out of the following, what kind of Network they have formed?
LAN, MAN, PAN, WAN

(d) Which of the following is not a characteristic of Open Source Software?

(e) Jai Khanna is confused between the terms Domain Name and URL. Explain the difference with the help of appropriate examples of each.

(g) Differentiate between Star and Bus Topology of networks.

(a) While working in Netbeans, Rajmeeta included a Listbox in the form. Now she wants the list of her friends' names to be displayed in it. Which property of Listbox control should she use to do this?

(b) What is the purpose of default clause in a switch statement?

(c) Which HTML tag inserts a horizontal straight line on a web page?

(e) How many times will each of the following loops execute? Which one of these is an entry control loop and which one is an exit control loop?

(f) Write a function in java that takes two numbers two numbers as input from textfields and displays their sum.

(g) How are tags used in XML different from tags in HTML? Write 2 points.

(a) If a database "Employee" exists, which MySql command helps you to start working in that database?

(b) Sahil created a table in Mysql. Later on he found that there should have been another column in the table. Which command should he use to add another column to the table?

(c) Pooja, a students of class XI, created a table "Book". Price is a column of this table. To find the details of books whose prices have not been entered she wrote the following query:

Select * from Book where Price = NULL;

Help Pooja to run the query by removing the errors from the query and rewriting it.

(d) Rama is not able to change a value in a column to NULL. What constraint did she specify when she created the table?

(e) Distinguish between a Primary key and Candidate key with the help of suitable example of each.

(f) The LastName column of a table "Directory" is given below:

Based on this information, find the output of the following queries:

a) SELECT lastname FROM Directory WHERE lastname like "_a%";

b)SELECT lastname FROM Directory WHERE lastname not like "%a";

(g) A table "Stock" in a database has 5 columns and contains 17 records. What is the degree and cardinality of this table?

(a) Define a class with reference to object oriented programming.

(b) What will be the content of jTextField1 after executing the following code:

(e) The following code has some error(s). Rewrite the correct code underlining all the corrections made:
int i=2; j=5;
while j>i
{jTextField1.getText("j is greater");
j--;++i;}
JOptionPane.showMessageDialog("Hello");

(f) What will be the contents of jTextField1 and jTextField2 after executing the following code:
String s = "ABC Micro Systems";
jTextField1.setText(s.length()+" ");
jTextField2.setText(s.toLowerCase());

(g) Glamour Garments has developed a GUI application for their company as shown below : 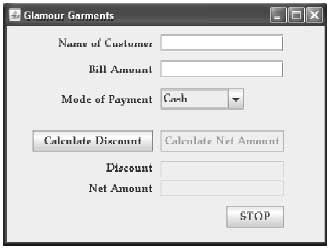 The company accepts payments in 3 modes- cheque , cash and credit cards.The discount given as per mode of payment is as follows.

If the Bill Amount is more than 15000 then the customer gets an additional discount of 10% on Bill Amount.

(a) Explain the purpose of DDL and DML commands used in SQL. Also give two examples of each.

i. To display all information about teachers of PGT category.
ii. To list the names of female teachers of Hindi department.
iii. To list names, departments and date of hiring of all the teachers in ascending order of date of joining
iv. To count the number of teachers in English department.
v. SELECT MAX(Hiredate) FROM Teacher;
vi. SELECT DISTINCT(category) FROM teacher;
vii. SELECT COUNT(*) FROM TEACHER WHERE Category = "PGT"
viii. SELECT AVG(Salary) FROM TEACHER group by Gender;

(a) Write an SQL query to create the table 'Menu' with the following structure:

(b) In a database there are two tables 'Customer' and 'Bill' as shown below:

(i) How many rows and how many columns will be there in the Cartesian product of these two tables?

(ii) Which column in the 'Bill' table is the foreign key?