Answer all the questions given below:

1. Point out a shortcoming and an advantage of using inscriptions to reconstruct history.2
2. Mention two steps taken by Akbar to promote harmony in his empire. 2
3. What purpose did mapping serve to the colonial government? 2

Answer any five of the following questions.

4. Describe the strategies used by archaeologists to track social differences in the Harappan society. 4
5. Examine the contribution of the Begums of Bhopal towards the preservation of Sanchi. 4
6. How were the water requirements of the people of Vijayanagara met? 4
7. Assess the role played by women of the imperial household in the Mughal empire. 4
8. Describe the life style of the Paharias. 4
9. ‘A major cause of the revolt of 1857 was Dalhousie’s occupation of Awadh.’ Give reasons to justify the statement. 4

Read the following passage and answer the question that follows:

‘God is called by many names:
Names like Allah, Ram, Karim, Keshav, Hari and Hazrat
Gold may be shaped into rings and bangles
Isn’t it gold all the same?
Distinctions are only words we invent.’

10. ‘The teachings of Kabir helped in strengthening values of peaceful coexistence in the society’. Explain giving examples from his ideas and state in what ways are his teachings relevant in the contemporary times to resolve conflict.

Answer any three of the following questions.

11. Critically examine the sources that have helped in reconstructing the history of the Mauryas. 8
12. Examine the lifestyle of the forest dwellers and analyse the economic and political changes that came about in the forest societies in the medieval period. 8

13. Illustrate, giving examples, the ways in which oral accounts helped in understanding the Partition better? 8
14 In what ways did Mahatma Gandhi transform the nature of the national movement? 8

15. Read the following extract carefully and answer the questions that follow:

Thus speaks Devanampiya Piyadassi:
‘In the past, there were no arrangements for disposing affairs, nor for receiving reports. But I have made the following (arrangements). Pativedakas should report to me about the affairs of the people at all times, anywhere, whether I am eating, in the inner apartment, in the bedroom, in the cow pen, being carried (possibly in a palanquin), or in the garden. And I will dispose of the affairs of the people anywhere.’

i. Name the ruler? What is meant by the term, Pativedaka? 1+1=2
ii. What does he want the ‘Pativedakas’ to do? What is his purpose? 2+2=4
iii. What does this inscription tell us about the nature of kingship of this period? 1

16. Read the following extract carefully and answer the questions that follow:

Music in the market

Read Ibn Battuta’s description of Daulatabad:
In Daulatabad there is a market place for male and female singers, which is known as Tarababad. It is one of the greatest and most beautiful bazaars. It has numerous shops and every shop has a door which leads into the house of the owner…The shops are decorated with carpets and at the centre of a shop there is a swing on which sits the female singer. She is decked with all kinds of finery and her female attendants swing her. In the middle of the market place there stands a large cupola, which is carpeted and decorated and in which the chief of the musicians takes his place  every Thursday after the dawn prayers, accompanied by his servants and slaves. The female singers come in successive crowds, sing before him and dance until dusk after which he ithdraws. In this bazaar there are mosques for offering prayers…One of the Hindu rulers…alighted at the cupola every time he passed by this market place, and the female singers would sing before him. Even some Muslim rulers did the same.

i. What are the indicators in the passage that tell us that it is a market place for music? 3
ii. What reference indicates the secular nature of the market? 2
iii. ‘Ibn Battuta has praised Indian cities and markets in his writings’. Elaborate. 2

17. Read the following extract carefully and answer the questions that follow:

What should be the qualities of a national language

A few months before his death Mahatma Gandhi reiterated his views on the language question:

This Hindustani should be neither Sanskritised Hindi nor Persianised Urdu but a happy combination of both. It should also freely admit words wherever necessary from the different regional languages and also assimilate words from foreign languages, provided that they can mix well and easily with our national language. Thus our national language must develop into a rich and powerful instrument capable of expressing the whole gamut of human thought and feelings.

To confine oneself to Hindi or Urdu would be a crime against intelligence and the spirit of patriotism.

i. What, according to Gandhiji should Hindustani be and what should our national language develop to be? 2 +2=4
ii. What was the opinion of members from the South on this issue? 1
iii. How did the Constituent Assembly resolve this issue? 2

18.1 On the given political outline map of India, Locate and label the following. 2

a) The Capital of Avanti
b) The VajjiSangha

18.2 On the same map three places where Ashokan Pillar inscriptions have been found, are marked as 1, 2 and 3. Identify them and write their names on the lines drawn near them. 3 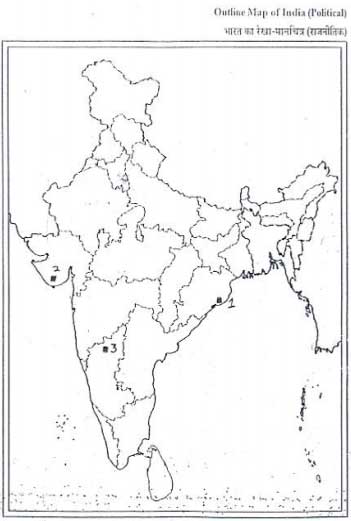