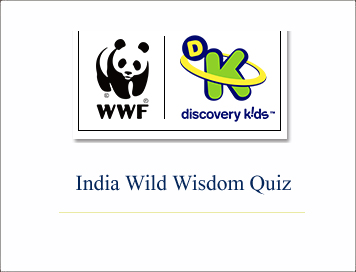 Please encircle the correct answer. All the best, kids!

1.   *Do you know which type of soil has the smallest grains?

2.   *Which part of soil gives nutrients important for plant growth? It is formed by the breaking down of plant and animal matter.

3.   In which country, besides India, is the wild Yak still found?

5.   How many arms does an octopus have?

6.   Plants obtain most of their nutrients from soil - which of these is NOT an important plant food?

7.   *Which social insects have a well-defined caste system including a Queen and King? They also change the soil to suit their own needs.

8.   What do ALL these animals have in common; Mosquito, Tiger, Woodpecker, King Cobra?

9.   *Now extinct, what kind of animal was the Dodo? It was cruelly hunted by European sailors, and is the logo of Gerald Durrell’s zoo.

10. Name the animal that can survive for as long as a week even after its head is cut off. This is because only a part of the nervous system is in its head and the rest of the brain is in the abdominal part of its body.

11. *What do earthworms do to improve the quality of the soil where they live?

a.   Decompose plant and animal matter

b.   Create channels for root growth

d. All of these

12. Which of these animals’ egg case is also commonly called a mermaid's purse?

13. *Did you know that 98% of the vultures in India died? This was because they ate dead cattle that had been treated with an anti-inflammatory drug. Which drug is this?

14. Koko is one of the few primates that has been recorded adopting a pet kitten. She is also famous for learning sign language. Can you tell us what species Koko was?

15. Prairie Dogs are found in North America and live in underground burrows. Which mammal are they closely related to?

16. Although they give shelter to Clownfish like Nemo, these beautiful sea creatures feed on other fish, mussels and plankton. Which animal is this?

17. Baby Flamingos are greyish, but the adults are pink – what gives this bird its pink colour?

18. *Which of these is a plant that is not from India, grows quickly and causes local plants and animals to die?

19. The ancient Egyptians were rich because they grew and traded crops like wheat, flax and papyrus. These were grown in soil deposited after the annual flooding of the River Nile – what type of soil was this?

20. *It can be expensive as a diamond and is used in perfumes. It is found in the excreta of the sperm whale– do you know what it is called?