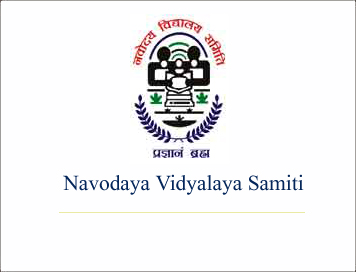 Admission in Jawahar Navodaya Vidyalaya is made on the basis of a Seketion Test designed and conducted by the CBSE. The test is called the Jawahar Navodaya Vidyalaya Selection Test (JNVST). It Is of non-verbal nature. class-neutral and designed so as to ensure that talented children from rural areas are able to compete without facing any disadvantage. Special care is taken to ensure that children from far flung areas get admission forms free of cost without any difficulty. Sufficient publicity is done through Doordarshan, All India Radio, local newspapers, pamphlets, vidyaloya websites, visits of Principals and teachers of Navodaya Vidyalayas to the local schools of the district. 18,91,092 Students applied for admission in Class-VI in various JNVs for 2015- I6Selection Test.

To appear in the Selection Test, a candidate has to fulfill the followingeligibility conditions :

(bl Candidates appearing for the selection test must be studying in Class-V for the entire academic session in a Government/Government-Aided. other recognised school or 'B'Certificate Competency Course of National Institute olOpen Schooling, in the sarnedistrict where he/she seeks admission.

A school will deem to be recognised if it is declared so by the Government or by any other agency authorized on behalf of the Government. Schools where students have obtained 12' certificate under National Institute of Open Schooling should have accreditation of NIOS. A candidate must successfully complete Class-V. Actual admission in Class-VI will be subject to these conditions.