Question 1
Study the extract of the Survey of India Map Sheet No. 45 D/ 7 and answer the following questions:

(a) Give the six-figure grid reference of:

(b) Name the most important perennial source of irrigation shown on the map extract. [1]

(d) Give two points in evidence to show that the region in the map extract has seasonal rainfall. [1]

(e) (i) What does the blue line in the Varka N indicate?

(ii) What is the general direction of the Varka N? [1]

(g) Which part of the map is more developed in agricultural occupation? Give a reason for your answer. [2]

(h) Give the four figure grid reference of confluence of Sipu river and Varka N. [1]

(k) (i) How many types of tracks are shown in the map extract? Name them.

(ii) What is the common mode of transportation in the southern part of this map? [2]

(l) What is the general pattern of settlement? Why? [2]

SECTION - B
Answer any two question from this Section.

Question 2
On the outline map of Asia, provided: 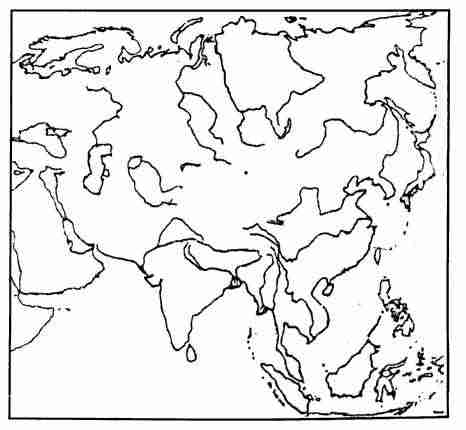 (c) Shade and name the Plateau of Mangolia. [1]

(j) Mark with a thick line and name the Yablonoi mountains. [1]

Question 3
On the outline map of the Indian Sub-continent, provided: 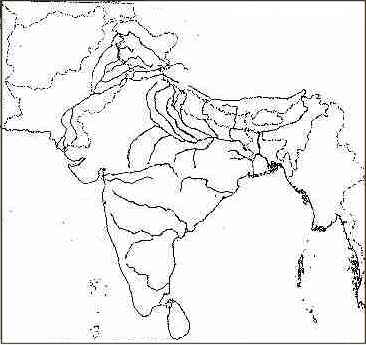 (e) Mark with a dot and name the city of Lahore in the appropriate place. [1]

(h) Print 'COTTON’ over one area, where it is cultivated South of the Tropic of Cancer in India. [1]

(k) Shade and write 'DP' over one area of Dense Population in North of the Tropic of Cancer. [1]

(l) Mark with a dot and name the biggest city on the West Coast. [1]

(a) Why are there great variations in the climate of the Indian sub-continent? [2]

(b) Name any two local winds which blow in India and write briefly about each. [2]

(c) (i) Under what rainfall conditions are the Tropical Rain forests found?

(ii) What are the two main characteristics of the trees found in Tropical Evergreen Forests? [2]

(d) Which regions of India have Desert Vegetation? How are they adapted to climate? [1]

SECTION - C
Attempt any three questions from this Section.

(e) What are the two methods of cultivation of rice? Which one is known for its better yields? [2]

Question 6
(a) With reference to Tata Iron and Steel Company, answer the following:

(b) Name the four centres of iron and steel in the public sector which are located in a single geographical region. With whose collaboration was each one of them set-up? [2]

(c) Why has Mumbai a large number of cotton textile units? [2]

(d) Give two reasons to show why the sugar industry has flourished in Uttar Pradesh and Bihar. [2]

(e) Give two reasons for the following:
The silk Handloom industry is important in Mysore. [1]

Question 7
(a) With reference to Jute Industry, answer the following:

(b) Name two industrial units engaged in the production of pharmaceuticals. [2]

(c) Why is fertilizer industry important for India? [2]

(a) Name two districts of Rajasthan irrigated by the Indira Gandhi Canal. From which river its water is drawn? [2]

(d) Where is the Rajasthan Nuclear Power Station situated? [1]

(a) State one advantage and one disadvantage of large dams. [2]

(b) State two ways in which canal irrigation systems can be improved in India. [2]

(e) Why have the Western Ghats great potential for hydro-electric power generation? [2]

(f) On which river is the Rihand Project located? Name an industry located near it. [2]