Question 1
Study the extract of the Survey of India Map sheet No. 45 D/7 and answer the following questions:

(a) Give the six figure grid reference of:

(b) (i) State the general direction of Arado N.
(ii) What does the blue line in Arado N indicate?[2]

(e) What type of rainfall is experienced in the region shown in the map extract? Justify your answer giving one reason.[2]

(f) Name and explain the term used for the brown lines in the map extract.[2]

(g) Name any two types of vegetation found in the map extract. Give a four figure grid reference for each.[2]

(j) What inference can be drawn about the general occupation of the people of the region shown in the western half of the map extract? Give one reason to justify your answer.[2]

SECTION - B
Answer any two question from this Section.

Question 2
On the outline map of Asia provided to you:

(a) Shade and label the Plateau of Tibet.[1]

(b) Mark and label the river Irrawaddy.[1]

(c) Mark with a bold line and label the Kunlun mountains.[1]

(e) Shade and print Tropical Evergreen Forests over one region where these forests cover an extensive area.[1]

(f) Shade and label the Plateau of Arabia.[1]

(i) Shade and label the Arctic Tundra.[1]

Question 3
On the outline map of the Indian sub-continent provided to you: 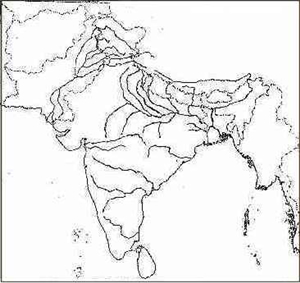 (b) Shade and name one region for each of the following:

(a) Along which meridian of India is the Indian Standard Time calculated? If the Indian Cricket team is playing at Lords (England) at 9.30 a.m., what time will it be in India? [2]

(b) State two differences between tropical cyclones and temperate cyclones. [2]

(c) Name one state in India which has a large area of Tropical Deciduous forests. Name two kinds of trees found in the above mentioned forests. [2]

SECTION - C
Answer any three question from this Section.

(a) Name the months when the Kharif and Rabi crops are:

(b) Name three coarse grains grown in India. Why are they so called? [2]

(c) State the temperature and soil requirements that favour the cultivation of rice. [2]

(d) Why is cotton grown widely in the Deccan Plateau? [2]

(a) With the help of an example each, differentiate between Basic and Consumer Industries. [2]

(c) The 'Khadi and Handloom Sectors of the Textile Industry cannot be ignored.' Give two reasons justifying this statement. [2]

(d) Why are the Iron and Steel Industries concentrated in the Damodar valley region? [2]

(e) With reference to the Cement Industry in India, answer the following questions. [4]

(a) State the importance of the tobacco crop to Indian economy. Which particular element is lost in a large quantity from the soil during the cultivation of these crops? [2]

(b) What is meant by mixed farming? State one advantage of this type of farming? [2]

(c) Why is tea considered a labour intensive crop? Name two States in India where tea is widely grown. [2]

(d) State the conditions necessary for the cultivation of rubber.

(a) Give two reasons why wells are more popular in the northern part of the country. [2]

(b) State two advantages and two disadvantages of canals. [2]

(c) State any two features of the Bhakra Nagal Project. Which man-made lake is associated with this project? [2]

(e) With reference to the Hirakund Project, answer the following questions. [4]

(a) How does Hydel power score over the other conventional sources of power. [2]

(b) State two objectives of the National Thermal power corporation. [2]

(c) Name four main atomic energy plants in India. Mention the states where each is located.

(d) What is Geo-thermal energy? State one disadvantage of this source. [2]

(e) With reference to power resources in India, answer the following: [4]