PART I (30 Marks)
Attempt all questions from this Part.

(b) Why is the vegetation in Pakistan scanty?[2]

(c) State two reasons why the rivers of the Deccan Plateau are non-perennial and non-navigable. [2]

(d) Name two States in India where Iron-ore is found on a large scale.[2]

(e) Mention two features of the climate of Bangladesh.[2]

(g) Which oil seed is inedible by man? State any two uses of the oil.[2]

(ii) What does the figure written along this line indicate? [2]

(b) Mention two main modes of transport used by the people in the area shown in the map extract. [2]

(c) On which bank of Sipu Nadi is the village Gulabganj (1920) situated? Where does the village get its supply of water from throughout the year? [2]

(d) What is meant by the term Fire Line? Account for the necessity of Fire Lines in the jungle area of the given map extract. [2]

(e) What is the nature of the canal shown in the map extract? Measure in kilometres the total length of the canal.[2]

(g) Which is the most important settlement in the map extract? Give one reason to support your answer. [2]

(ii) Mention one striking difference between these two settlements. [2]

SECTION 1
Attempt any three Questions from this Section.

(a) Where is Maldives located? What is meant by the term atoll? How many atolls make up Maldives. [2]

(b) Mention two reasons to justify the need to include Myanmar and Afghanistan as extensions of SAARC countries. [2]

(c) What was Bangladesh formerly known as? Why is the land of Bangladesh fertile? Name the countries which have a land border with Bangladesh. [3]

(d) How is the geological structure of Sri Lanka similar to that of Peninsular India? State two main occupations of the people in Sri Lanka. [3]

(a) Name the hills that make up the Purvanchal Ranges in India.[2]

(b) Give reasons why in Bhutan:

(c) Name the States of India which touch the borders of Nepal. Why does Nepal have limited cultivable land? [3]

(a) Study the table given below and answer the questions that follow:

(b) Why is Laterite soil unsuitable for the cultivation of crops? Name an area in India where this soil is found. [2]

(b) State two main drawbacks of the Coal found in India. [2]

(c) Mention two uses of Limestone. Where, in Bangladesh, is Limestone found? [3]

(d) State the SAARC country which has the largest Iron ore reserves. Mention two States in the country named by you, where the reserves are abundant.

Question 8
On the outline map provided to you, mark and label the following:- 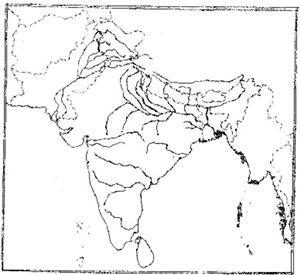 (i) An important port of Pakistan[1]

(j) Direction of the Summer Monsoon over Sri Lanka[1]

SECTION 2
Attempt any twoquestions from this Section.

(a) Describe any two main features of Subsistence Agriculture. [2]

(b) Explain briefly why:

(c) Give two reasons for pulses being grown extensively in India. Name any two pulses. [3]

(d) (i) Name the most important fibre crop in West Bengal.

(ii) Describe two geographical conditions which favour the growth of this crop.[3]

(a) Classify the Coal-fields in India. Name one State for each classification. [2]

(b) Mention two products of an Oil refinery. Name two Oil refineries in India, one along the coast and one away from the coast. [2]

(c) State the conditions necessary for the formation of Natural gas. Mention two advantages of using Natural gas as a source of energy. [3]

(a) Give reasons why:

(b) State four geographical factors which should be kept in mind while setting up an Agro-based industry. [2]

(d) Name three by-products of the Sugar industry. Give one important use of each. [3]

(a) State the importance of Electronics in the field of:

(b) Where does the Bhilai Iron and Steel Industry get its supply of:

(c) (i) State the importance of the Heavy Engineering Industries in the industrial development of India.