PART I (30 Marks)
Attempt all questions from this Part.

Question 1
Study the extract of the Survey of India Map sheet No. 45D/10 and answer the following questions:-

(c) (i) In grid square 1909 several contours merge at one point. What does this represent?

(ii) State the significance of the red dotted lines in the map extract. [2]

(d) Name the type of rainfall experienced in the region shown in the map extract. Give a reason to support your answer. [2]

(ii) Name the settlement that has a post office. [2]

(h) Calculate the ground distance in kilometres along the metalled road between the causeway in 1502 and the distance stone marked '14' in grid square 1203. [2]

(i) State two reasons for the absence of human habitation in the north eastern region of the map extract. [2]

(j) (i) Mention the difference in height between the highest spot height in the map extract and the contour height in grid square 1006.

Question 2
On the outline map provided:- 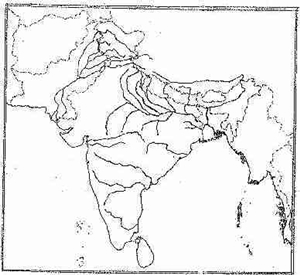 (d) Mark and label the Capital City of Pakistan. [1]

(g) Mark with arrows the direction of the North East Mountain winds over the Bay of Bengal. [1]

(i) Shade and label an area of Laterite soil in India. [1]

(j) Shade and label an area of Limestone in India. [1]

Attempt any three questions from this Section.

(a) With reference to Pakistan name the following:-

(b) Name the four mountain ranges radiating from the Pamir Knot. [2]

(c) State two features of the drainage of Sri Lanka. Name the water body that separates Sri Lanka from India. [3]

(d) Why is Bangladesh prone to flooding? How are the floods beneficial to the people of that country? [3]

(a) How have the relief and climate of Nepal affected the basic occupations of the people of that country? [2]

(b) Mention two differences between the Deccan Plateau and the Baluchistan Plateau of South Asia. [2]

(c) (i) Name the countries which have a land borders with Bhutan.

(ii) Explain why none of the rivers of Bhutan are navigable but have a great potencial for hydro - electric power. [3]

(d) Distinguish between the rivers of the North Indian Plains and those of Peninsular India. [3]

(i) Which SAARC country is the first to receive the South West Monsoons? Give a reason to justify your answer. [2]

(b) (i) Which winds are responsible for the rainfall experienced over the greater part of the SAARC countries?

(ii) During which months of the year is this rainfall experienced? [2]

(c) Give reasons for the following:-

(c) Study the table given below and answer the questions that follow:-

(a) State two differences between Black soil and Alluvial soil [2].

(b) Mention two ways by which soil can get nitrogen. [2]

(d) How is red soil formed? State two reasons for the low productivity of red soil.

(a) Name one important oil field each in Bangladesh and Pakistan.

(b) Name two states in India where manganese is found. State one use of manganese. [2]

(c) Name the four types of coal. Which of these is the best for industrial purposes? justify your answer. [3]

(d) Which country in South Asia is the largest producer of bauxite? Why is bauxite considered an important mineral? [3]

SECTION 2
Attempt any two questions from this Section.

(a) State two geographical requirements for the growth of cotton. [2]

(b) Mention two differences between shifting agriculture and plantation agriculture. [2]

(c) (i) Name two main varieties of coffee.
(ii) Why are the following trees commonly grown in a coffee estate?
(l) Dalap and Silver Oak
(2) Orange and Plum [3]

(b) State two reasons why bio-gas is considered an ideal domestic fuel. [2]

(d) State the main purpose for which the Kosi Project was set up was set up. Name the two countries that share this project. [3]

(a) Mention the problem faced by the Sugar industry in India. [2]

(b) State two steps taken by the government to overcome the problem faced by the jute industry in India. [2]

(c) Mention three factors that favour the concentration of the cotton textile mills in Mumbai. [3]

(d) State three reasons why the woollen textile industry has not developed in India. [3]

(a) (i) State the importance of Electronics in Defence.

(ii) Mention one important requirement of the Electronics industry. [2]

(c) (i) State two geographical factors which were taken into consideration for the setting up of the Durgapur Iron and Steel Plant.

(ii) Mention any one problem faced by the Iron and Steel industry in India. [3]

(d) Name the following in India:-