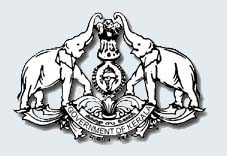 Kerala Board of Public Examinations

General Instructions to candidates:
• There is a cool-off time of 15 minutes in addition to the writing time of 2½ hrs.
• Use the cool-off time to get familiar with questions and to plan your answers.
• You are not allowed to write your answers nor to discuss anything with others during the cool-off time.
• Read the questions carefully before you answer them
• Answer all other questions.

Read the following extract from APJ Abdul Kalam's speech and answer the questions that follow.

1. Give two pieces of advice to your friend, not to do these things in India, too. Use expressions like 'You should n't…..' 'You ought/ ought not to….', 'Why don't you….?'
One example is done for you.
'Why don't you throw coconut shells in the garbage pail? (2)

2. You want to put up in public places two wall notices in order to try and prevent people from going on with the bad practices mentioned by Dr Abdul Kalam. Prepare those wall notices. (2)

3. If you find people throwing empty coconut shells anywhere and spitting paan here and there, what will you do? Write down in one or two sentences the action you'd take. Use expressions like, 'I'd…..', 'Perhaps I'll….', I think I'll….'
Eg: I’d advise them not to do so. (2)

4. What do you think should be the punishment given to those who violate laws of acceptable social conduct? List them in one or two sentences. Use expressions like 'I think', 'In my view…', ‘As far as I am concerned’. ‘If you ask me....’ (2)

5. How would you respond to the questions raised by Dr Abdul Kalam? What are your observations in this context? Write them down in one or two sentences.
Eg: What Dr Abdul Kalam said is right and relevant to the present Indian situation. (2)

Read the following poem Homecoming and answer the questions that follow:

I went back in the alley
And I opened up my door.
All her clothes was gone:
She wasn't home no more.
I pulled back the covers,
I made down the bed.
A whole lot of room
Was the only thing I had.
And a note on the stands
Written in her own hand
"Good bye, Mom. Don't seek
I don't need your love".

7. What do you think of the mother - child relationship portrayed in the poem? Write down your responses in 3 or 4 sentences (3)

8. Compare the message of this poem with that of 'Middle Age'. Prepare a brief write-up comparing the two poems. (5)

9. Imagine that the local self-government in you area has decided to cut down the trees in your school campus. You are the Chief Editor of your class magazine and you want to protest against the felling of the trees through your editorial. Write down the editorial in not more that 120 words. In your editorial, highlight the issue, your views of the situation, facts and figures if any and your suggestions for resolving it.
(Hints: The issue and its relevance ---- environmental problems created ---- lack of shade ---- shelter for animal life ---- your suggestions) (7)

10. Imagine that you are participating in a panel discussion on the topic, ‘How useful are the TV programmes. Watching Television doesn't promote independent thinking’. The first panellist made the following introductory speech.

You are the second panellist to talk on the topic. Prepare the points you would raise and write the speech you'd make in about 80 words.
(Hints: certain educational programmes - informative and enlightening. News channels -open the window to the world… different channels…) (6)

"It was June 1932. A four-year-old girl, Sevehild Hansen, was playing in the yard in front of the farmhouse. Suddenly a large eagle came down, caught hold of the child in its claws and flew up. Luckily the child's dress was held in its calves, so she was not hurt. The big bird cruised up to its nest. Eagles build their nests in high rocks. This one's nest was on the side of a mountain. Unable to continue its flight, the bird put the child down on the flat rock, which was eight hundred feet up the side of the mountain. The bird's nest was just fifty feet away.

By the time Sevenhild's mother and father and a large party of men had set out to look for the child. They noticed the eagle flying round and round over the rock in the mountain. They thought that the child might be there and went quickly to the place, though they did not have much hope that they would find her alive.

However, when they finally reached her, little Sevenhild was fast sleep! She was not even hurt except for a few scratches.

11. Pick out a word from the passage which means "to travel with pleasure". (1)
12. Suggest a suitable title to the passage. (1)
13. List down the sequence of events given in the narrative, in the flowchart provided below. (6) 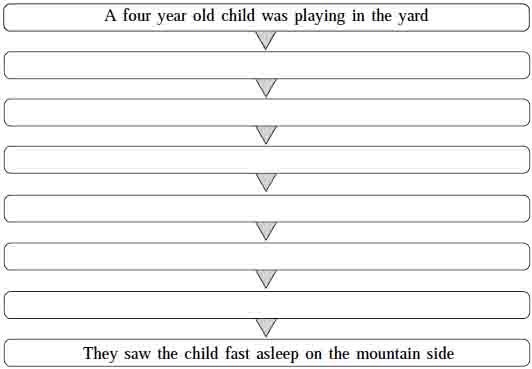 14. You want to make a documentary based on this incident. As you couldn't shoot the incident when it happened, you use actors and recreate the events. Now, write a screenplay for the last scene where the parents meet the child safe and secure on the high mountains.
(Hints: Shot 1 : Parents and the search party climbing up the rocks,
Short 2 : They see the child.
Short 3 : Mother's reaction
Short 4 : Father and others in the search team - their reactions.

(Avoid technical details like camera angles and tips for editing. Focus on the movement of actors - dialogue - background- atmosphere etc.) (7)

Muralidhar Devidas Amte, better known as Baba Amte, was educated to be a lawyer. One day, when he was quite young, a fierce tiger attacked him in the forest. But he was not afraid and managed to escape. He was very proud of the courage he had shown until the day he saw a leper living in a ditch. He felt afraid to touch him and help him. It was then that he realised that he was not really a brave person. Amte took the leper home and tended him. This experience brought a dramatic change in his life. He now began to devote himself to the service of the poor and the sick. Amte gave up legal practice in 1949. He took training in Calcutta in the treatment of leprosy. He then founded Amnadwan, 'the forest of joy', a township near Nagpur, in 1950. There was now new hope for leprosy patients. From just a few patients in 1950 the number has gradually risen to over two thousand.

Anandawan tells the story of courage and faith. It began with a small piece of forest land, six patients and an investment of just fourteen rupees. Everyone lived in thatched shelters. But the patients were treated with great love and care. By and by wells were dug and the land cultivated. Today, with aid from different agencies and people in India and a broad Anandwan has many buildings, farms and a fully equipped hospital. For his remarkable work, Baba Amte has received numerous awards including the Padmasri in 1971 and the Damien-Dutten Award for Leprosy Aid in 1983.

15. You want to interview Baba Amte for a documentary. Prepare the questions for interviewing him and the possible responses to them. (At least 4 questions and their responses). (8)

17A. Read the following extract from 'The King Who Limped'.

Courtier [kneeling on the window-seat] “There are crowds of people in the street, and it is pouring with rain. They don’t seem to mind a bit. Now they are all waving their hands”. [The sound of a trumpet is heard.] Ah! Here he comes. [Craning nearer to the window] Well, that’s queer.

Later the king enters the court wearing a bowler hat and walks with a pronounced limp. Behind him comes a page carrying a dog on a cushion. Imagine that you are the reporter of the local daily. Prepare a news report on the arrival of the new king. (8)

17B. Read the following extract from 'The Open Window'.

In the deepening twilight three figures were walking across the lawn towards the window. They all carried guns under their arms, and one of them was additionally burdened with a white coat hung over his shoulders. A tired brown spaniel kept close at their heels. Noiselessly they neared the house, and then a hoarse young voice chanted out of the dusk: ‘I said,Bertie, why do you bound?’

Framton grabbed wildly at his stick and hat: the hall-door, the gravel-drive, and the front gate were dimly noted stages in his headlong retreat. A cyclist coming along the road had to run into the hedge to avoid imminent collision.

‘Here we are, my dear,’ said the bearer of the white mackintosh, coming in through the window: ‘fairly muddy, but most of it’s dry. Who was that who bolted out as we came up?’ ‘A most extraordinary man, a Mr Nuttel,’ said Mrs Sappleton, ‘could only talk about his illness, and dashed off without a word of good-bye or apology when you arrived. One would think he had seen a ghost.’

‘I expect it was the spaniel,’ said the niece calmly, ‘he told me he had a horror of dogs. He was once hunted into a cemetery somewhere on the banks of the Ganges by a pack of pariah dogs and had to spend the night in a newly dug grave with the creatures snarling and grinning and foaming just above him. Enough to make anyone lose their nerve.’

Imagine that your are going to enact this part of the story before your class in the form of a short play. Transform the story into a script for the stage in about 120 words. (8) (Hint: give stage directions - hints on the movement and action of actors - setting - dialogue).

It shows the amount of leisure time enjoyed by men and women of different employment status. 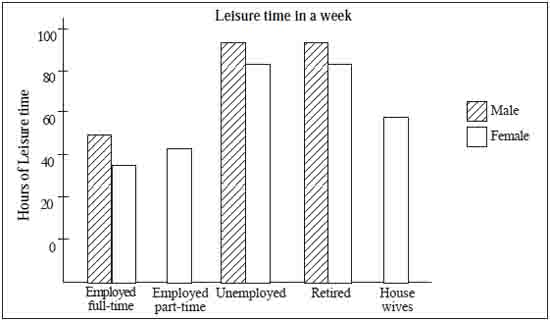 Framton grabbed wildly at his stick and hat: the hall-door, the gravel-drive, and the front gate were dimly noted stages in his headlong retreat. A cyclist coming along the road had to run into the hedge to avoid imminent collision.