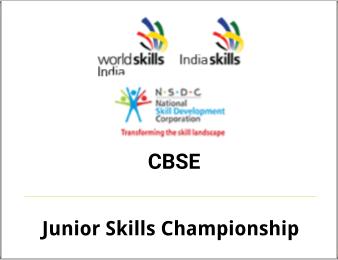 National Skill Development Corporation (NSDC), like Central Board of Secondary Education (CBSE), is an affiliating agency for the training centers that run short-term courses under the National Skills Qualification Framework (NSQF). NSDC is also the implementing agency for PMKVY, one of the largest government initiative in the social sector with the additional obligation of preparing the youth to represent the nation in international skills competitions.

WorldSkills International (WSI) is a membership organization like International Olympics Association established in 1950 to promote vocational education and skill training in countries across the globe. Every two years, it holds the largest skill competition in the world- WorldSkills Competition in one of the WSI member countries. The competition is equivalent of Olympic Games for skills.

The primary objective is to promote world class standards in over 50 skills. The competition is for youth below the age of 23 years and performance in the competition is judged on the basis of a project which has to be completed over four days. Next competition is in October 2022 in Shanghai, China.

22 states took up skill competitions at district and state levels. In order to create capacity, initially over 150 workshops were held by NSDC with help of Corporates and SSCs and 200+ sample test project were created in more than 45 job roles aligned to WorldSkills norms.  More than 100 Corporates have come forward to work with States and NSDC for competitions and this connect has helped further a Government – Industry – SSC connect. 2

• Advocacy: Popularize skills at grassroots levels through the medium of skill competitions.
• Capacity Building: Through workshops – trainers and subject matter experts from states were coached by industry and other experts.
o Over 200 sample test projects were developed for 45 job roles
o Several past competitors have taken up jobs as trainers and are helping transfer their learning to future generations.
• Benchmarking: With skill competitions, States were able to benchmark skill levels and training infrastructure available for different job roles as per international standards
• Creation of role models: Winners at different levels become role models for other peers to follow. Several competitors are from very humble backgrounds where parents are small farmers, coolies, drivers, carpenters, small businessmen etc.
• Performance in World levels: IndiaSkills Competition helps to identify competitors with talent who can represent India in Worldskills Competitions.

The main mission of the JuniorSkills Championship will be to provide school children an opportunity to explore and make informed career choices in a rapidly changing world and contribute to the economic growth of India through their skills. This will build aspiration among the youth towards Vocational/Skill Education.

JuniorSkills Championship will be for competitors below the age of under 16 years. They can compete in skills as per IndiaSkills and WorldSkills standards.

Partnership with Central Board of Secondary Education (CBSE)

JuniorSkills Championship has been envisaged from this year onwards will be conducted in CBSE schools across country. This activity has been envisioned in line with latest National Education Policy wherein emphasis is given to include vocational courses in schools.

In this initial cycle limited Skills will be taken up in conjunction with CBSE, list is as under among which shortlisting will be done:

Brief summary about various skills to be taken up in this competition is enclosed.

For promoting and creating awareness among the students, a skill competition kit will be sent to schools. This would help the school in creating adequate content and sensitize the stakeholders with right information.

All the above e-collaterals will be shared with schools over email. The school would be able to add their logo and further promote them.

Further, NSDC through its social media channels will also support and acknowledge the initiatives taken up by school related to JuniorSkills Championship. This includes promoting their content, acknowledging the contribution by their leadership, inviting them for webinars and other formal events.