The Periodic Table of Videos

The periodic table of the chemical elements (also periodic table of the elements or just the periodic table) is a tabular display of the chemical elements. Although precursors to this table exist, its invention is generally credited to Russian chemist Dmitri Mendeleev in 1869, who intended the table to illustrate recurring ("periodic") trends in the properties of the elements. The layout of the table has been refined and extended over time, as new elements have been discovered, and new theoretical models have been developed to explain chemical behavior.

The periodic table is now ubiquitous within the academic discipline of chemistry, providing a useful framework to classify, systematize, and compare all of the many different forms of chemical behavior. The table has found many applications in chemistry, physics, biology, and engineering, especially chemical engineering. The current standard table contains 118 elements to date. (elements 1–118).

A block of the periodic table of elements is a set of adjacent groups. The term appears to have been first used (in French) by Charles Janet. The respective highest-energy electrons in each element in a block belong to the same atomic orbital type.

Each block is named after its characteristic orbital; thus, the blocks are:

The block names (s, p, d, f. and g) are derived from the quality of the spectroscopic lines of the associated atomic orbitals: sharp, principal, diffuse and fundamental, the rest being named in alphabetical order. Blocks are sometimes called families. 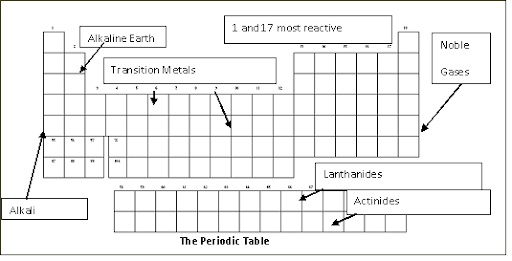 Courtesy: Periodicvideos.com (The University of Nottingham)